“Apples that are no more” Great Beauty

The “Feelings” series of works

“Apples that aren’t there anymore.”

Something flipped inside me when I saw this paper. Time had made it look like the skin of an old man. It had become a living history, like the people themselves, who had lived long and difficult lives in the postwar years. Small cracks, creases, irregularities, and lint carpeted it. I wanted to touch it with my fingertips for fear of disturbing the fragile beauty that had been sleeping for decades in the closet.

Carefully unrolled the roll, I saw the inscriptions: “Apples 1997, 1999, 2004, etc.”. Immediately I called the granddaughter of the owners of this paper and asked what it means and why? Hearing the story, I put my hands on the paper and saw everything. It is a story of apples that no longer exist, a story of a lifetime, a lifetime of people, trees, and paper.

The couple had lived a long and not easy life, after the war they were starting over like everyone else. Having got in use the lawful six hundred square meters, they with zeal and faith in the bright future grew an apple orchard. Apples were a welcome treat: jams, compotes, dried and in pies for them, for the children and later for the grandchildren in times of total scarcity. Time went by, the world was changing and was moving steadily toward that bright future. The children grew up, grandchildren were born, the deficit was replaced by a new economy and filled the shelves with an abundance of candy, chewing gum, apples of different varieties and flavors. And the orchard was still nursing and fruiting, it was guarded, as always, by the caring hands of the owner. The day came and the father of the family was gone, the orchard had long been abandoned, the apples no longer existed. The taste of those apples has remained only in the childhood memories of grown-up children, who buy apples in the store in the bright future.

Old paper as an artifact from the past reminds us of time. Dried apples were stored in this paper for several years (about 8 years). Using this particular sheet year after year. Just imagine the attitude of people who have gone through hardships and commodity shortages. Respect and care even for a piece of paper.

The picture depicts a dry dead apple tree. As a symbol of a bygone era of dacha and family traditions of continuity in our society.  Golden circles are circles of time, the strokes between them are minutes, seconds lived not only by me and you. About the concept of circles of time is a separate topic.

And this is my very first work on this format, I was very afraid to start. The first strokes felt like a jump in cold water. And it is in this work was born my technique to paint. When I have finished the first not big fragment, I could not believe my eyes that I have created it. It was a trance. “Discover yourself” The Great Beauty 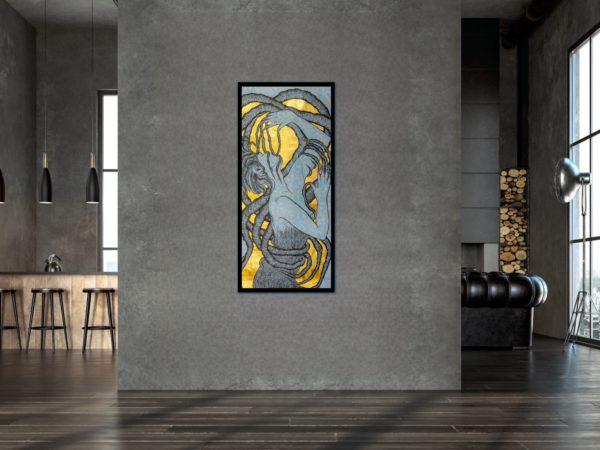 Energy Image No. 2 autoportet “I am another tree”